Introduction to the I-REC Standard:

Development of Platform Adherent to the I-REC Standard

I-REC Standard Accredited Platform Operators enable marketplaces, provide visualization tools for the end-users, facilitate additional infrastructure to market players and further strengthen I-REC markets. The establishment of the Platform Operator role within the I-REC Standard has opened the door to I-REC markets for various ambitious projects around the globe and gave them the opportunity to leverage the API connection with the I-REC Evident registry to create various EAC-related products and services. No matter the origin or the goal, these Platforms undergo a uniform Accreditation to ensure their adherence to the requirements of the Standard. This session is designed to showcase such Platforms in their robustness and various stages of development and share a joint vision of how Platforms would affect the future of the markets.

The need for EAC standards is more apparent now than ever. With attribute tracking becoming an integral part of electricity market development, EAC standardization plays a critical role in ensuring both power generators and end-users have access to credible, transparent, and globally harmonized information about the origin of their electricity. EACs are becoming the common denominating instrument for new energy markets beyond electricity—such as for clean hydrogen—this session will describe how EACs fit into new markets, how additional tracking layers are being implemented in different countries and the role of different stakeholders in these new attribute markets.

Dirk van Evercooren | Chair of the I-REC Standard Foundation Board

Europe has successfully integrated its EAC markets to support cross-border clean power transactions. This has supported the growth of clean energy generation alongside more robust corporate procurement options and cross-country EAC transactions. Asian governments and utilities are working toward similar agreements that are in line with corporate clean power ambitions. This session will discuss progress toward market integration, implications for buyers and sellers, next steps, and how to engage in the process of broader ASEAN market transformation. The session will also address the popular question from governments on how EAC exports affect nationally determined contributions under the United Nations Framework Convention on Climate Change, and how to manage their EAC markets accordingly.

By the time this session takes place, the I-REC Standard Foundation, together with Avance Labs as Code Manager, will have launched an I-REC Standard Product Code for Hydrogen. That said, clean hydrogen is still in its infancy. Projects are planned and slowly coming online, but demand-side risk due to lack of regulatory certainty is a barrier to further development. This session will review the I-REC for hydrogen mechanism and broadly discuss how certification can reduce demand-side risk on long-term contracts. With an estimated 80% of hydrogen likely to be generated in the Gulf Coast Countries, Avance’s placement in Abu Dhabi has it strategically positioned to be right in the middle of the action. Avance will lead an engaging panel—seeking to disseminate challenges and lessons to date while engaging the audience in charting the way forward.

Global EAC Standardization and the Impacts of Carbon Border Taxes

Import carbon taxes such as the European Cross Border Adjustment Mechanism (CBAM) will have major implications on the costs of trading goods between nations and global regions. A critical challenge to the effective implementation of these systems will be reaching a consensus on how different environmental attributes are counted and used in these frameworks. The standardization of EAC systems across the world will play a key role in ensuring credible Scope 2 accounting as it relates to the production of goods. This session will discuss interlinkages between EAC markets and cross-border carbon taxes—highlighting the need for standardization of EACs to support the rollout of new accountability frameworks.

Use of Renewables Across the Supply Chain

Downstream procurement is becoming an important aspect of every major corporate social responsibility strategy. However, a vast range of questions remains unanswered. How can corporates support their supply chains in achieving Scope 2 decarbonization? How can brands ensure their Scope 3 emission reductions are linked to support their delivery to supply chain stakeholders—including downstream EAC procurement and PPA arrangements. This session will share best practices on how to link supplier Scope 2 emissions to brand-level Scope 3 accounting. It will also explain how emerging solutions are being integrated into the I-REC Standard and other major reporting frameworks. Key topics of this session include new labeling protocols, auditing strategies, and use cases for linking Scope 2 and 3 between brands and suppliers.

From 2020 to 2022, the I-REC Standard has added over fifteen (15) eligible I-REC(E) issuance countries to the map. Emerging markets in Central Asia, Turkey, and South America are seeing similar growth patterns and experiencing similar issues related to EAC implementation adherent to the I-REC Standard. This session will review growth trends in these new markets from both the supply and demand perspectives, introduce key stakeholders, and describe some market mechanisms that are creating success stories in emerging markets. The session will be relevant to end-users looking to source EACs in new markets, as well as brokers and intermediaries scaling up portfolios in previously inaccessible countries.

Granularity and the Role of Platforms

Some of the most advanced corporate power buyers have expressed interest in procuring renewable electricity with increasingly fine granularity—down to 15-minute intervals linked with power consumption. The I-REC Standard Foundation and its partners such as the Electricity Code Manager, Evident, are piloting novel solutions to make this possible: early pilots have used third-party platforms and visualization tools to support implementation. Sharing best practices, challenges, and potential solutions will be critical for expanding access to hourly matching to all end-users in the market. This session will share firsthand experiences implementing these pilots and will discuss how other market participants (including new platforms and additional end-users) can get involved.

The development of EAC markets is critical for supporting dialogue between governments and economic powerhouses including the Fortune 500s. While governments across the region have supported the development of clean energy markets, more work remains to be done. This session will bring together high-level panelists from the world’s leading brands to discuss progress to date, and remaining barriers that still impact meaningful clean energy procurement. Government and utility stakeholders are invited to join the conversation with an engaging question-and-answer session aimed at encouraging public-private dialogue and collaboration in support of low-carbon, high-yield economic growth.

Sam Kimmins | Director of Energy and RE100 | Climate Group

Volume and Prices, Value of Renewables Around the World

This session will answer the single most frequently asked question in EAC markets: how much are they worth? End-users, power generators, and brokers alike will walk away with insights on benchmark prices to help guide sales and procurement in 2022. The world’s biggest environmental commodity retailers will take the stage to share insights on supply gaps, liquidity overflows, and how they are pricing EACs across different fuel types and geographies. Any market participant remotely involved in buy- or sell-side decisions in the EAC space should mark this session on their agendas and consider arriving in advance—space may be limited.

The Product Code for Carbon Removal (CDR) is new but is no doubt going to be impactful. This ex-post, fact-based instrument is guaranteed to provide durable sequestration of GHG emissions on a 100+ year time horizon. Adopting established principles and procedures from REC markets will bring more transparency, integrity, and credibility to the Voluntary Carbon Market, enabling the scale of CDR technologies in line with Net Zero. This session offers the opportunity to learn more about the CDR Code and how C-Capsule is implementing this on a global scale including innovative applications like CarbonSig.

Collaboration across governments, development partners, utilities, and the private sector is playing a key role in spurring new renewable energy generation across ASEAN and beyond. This session will bring together speakers that are leading public-private collaboration in the clean energy space, and explain how stakeholders can engage with them on driving increased clean energy generation and procurement.

EAC Registries and Marketplaces—More than just an IT Solution

Credible EAC instruments start with the development of robust standards, their integration into local policy environments; and yes, they require digital infrastructure to support credible data management. The development of advanced registry environments and blockchain-backed trade platforms can and will help the market to grow. However, IT-centric solutions often overlook the critical role of policies and standards in the broader EAC ecosystem. It will cover key topics for emerging solution providers to consider when developing new tools and will explain different ways for them to get involved in the EAC space. While this session is designed for technology experts and blockchain enthusiasts, it will also support governments in assessing the pros and cons of developing internal IT solutions to support tracking, settlement, and market transactions for EACs.

The Future Vision for EAC Markets

End-users around the world—ranging from corporations to households—have made it clear that the demand for clean energy is here to stay. The question is no longer whether it is possible to select clean power products, but which ones are the best, which markets are making them most readily available, and how governments, generators, and consumers alike can drive deeper impact. This closing panel will bring high-level executives and government representatives together to discuss what is coming next, how clean energy markets are affecting foreign direct investment planning, and how countries across the region are reimaging a high-yield, low-carbon development future together. 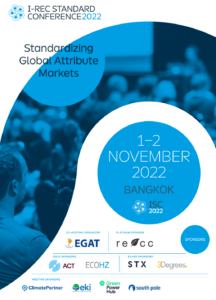